Artist: Athar Abbas
This picture is not made with the artist's preferred materials, but relies on oils and papier mache and actual pieces of jewellery which Mr. Abbas found on the street, which probably belonged to children as the pieces are very small and faux bijoux. These are on the forehead and in the ear of the woman.
Her face is two-dimensional, made from paper, and as you can see, the white and pink makeup on the face are not the same skin tone as that of her shoulder which is not quite concealed by her dupatta or shawl..
In both Pakistan and India it is desirable to have fair skin and women use creams and lotions to make their skin fair.
Often women and perhaps men are coerced, rather than forced into an arranged marriage, and the sadness on this bride's face seems to suggest that this is her plight.
The artist usually does not feature people in his pictures, and this is a rare example. Only the signature frame with crushed stones in the corner shows that this is the work of Mr. Athar Abbas.
Posted by His Art and My Recipes at 04:59 No comments: 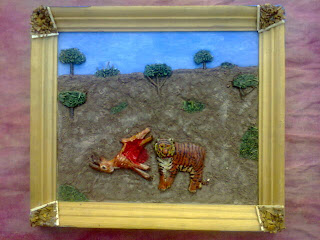 This work is set in the African continent as is Zebras at a Water Hole, but this demonstrates the cruel side of Nature and the struggle for survival. The tiger has bloody chops, and the deer has been disemboweled
Both animals are carved in wood and then painted, so that they are two-dimensional and stand out from the crushed stones that fill most of the picture.
The trees are made of pieces of twig and herbs and the bushes in the background is also made from herbs.
The artist's signature is again seen in the crushed stones set into the corners of the wooden frame which the artist has made.
Mr. Abbas has never been to Africa, but says that he enjoys watching programmes on TV about African animals, and these programmes were his inspiration for the two pictures.
.
Posted by His Art and My Recipes at 01:21 No comments:

Email ThisBlogThis!Share to TwitterShare to FacebookShare to Pinterest
Labels: NATURE RED IN TOOTH AND CLAW

SIX PICTURES IN WOOD AND STONE BY ATHAR ABBAS 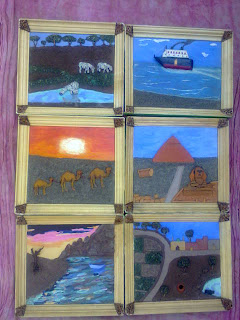 Artist: Athar Abbas
The pictures are : Zebras at a Water Hole; Pyramid and Sphinx:: A Pakistani Village; Ships of the Desert: Boat on a Stream at Twilight and the Ship under Sail. To see them enlarged please click on the links.
Posted by His Art and My Recipes at 06:20 No comments:

Email ThisBlogThis!Share to TwitterShare to FacebookShare to Pinterest
Labels: 6 pictures in wood and stone

BOAT ON A STREAM AT TWILIGHT:- A WORK IN WOOD, STONE AND OILS BY ATHAR ABBAS 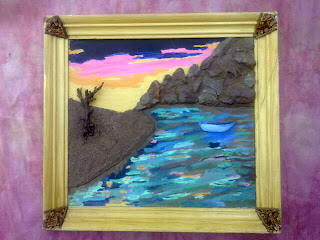 Artist: Athar Abbas
This is an unusual picture from Mr. Abbas, as it has more oil paint than usual. The boat and tree are two-dimensional and made of wood, with the tree being part of an actual branch.
The mountain is made from large stones while the foreground on the left of the picture is made from crushed stones and herbs along the stream's banks.
It is difficult to ascertain whether it is dusk or dawn, but with the stark outline of a dead tree, and the dark colours of the water it looks as though the place is barren, and polluted, with the small pale-blue boat in the centre of the stream attesting to the presence of people - the polluters.
The wooden frame is hand-made by the artist with his signature - crushed stones, in the corners.
Posted by His Art and My Recipes at 00:23 No comments:

Email ThisBlogThis!Share to TwitterShare to FacebookShare to Pinterest
Labels: BOAT ON A STREAM AT TWILIGHT

SHIP UNDER SAIL; A WORK IN WOOD AND STONE BY ATHAR ABBAS 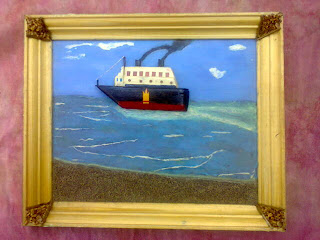 The ship is carved out a wood and then painted. The cable is cotton and is three-dimensional, while the ship is two-dimensional. It really does stand out from the background well. It has clearly just left port and is polluting both the sea and the atmosphere, and Mr Abbas emphasizes this with the blackness of the smoke coming out of the funnels. The wake left by the ship is a dirty colour, which contrasts with the bright blue of the sky. The sea around the land, which is made from crushed stones, also looks polluted.
In this picture Mr. Abbas again has no people visible although the pollution they cause is clear.
The distinctive signature frames and made by the artist and the corners are filled with crushed, varnished stones.
Posted by His Art and My Recipes at 07:45 No comments:

Email ThisBlogThis!Share to TwitterShare to FacebookShare to Pinterest
Labels: SHIP UNDER SAIL 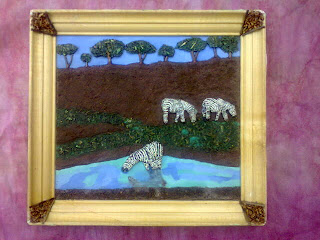 This work marks another digression away from Pakistan. Mr Abbas says that he is interested in all animals, especially donkeys, which he calls "social workers" and the wild African animals.
In this picture, the zebras are carved from pieces of wood and then painted; they and the trees in the background (which are made from twigs and herbs) are two dimensional.
The foreground is composed of crushed stones and the pool and sky have been painted with oils.
The wooden frame is handmade with crushed stones in the corners which are the artist's signature.
Posted by His Art and My Recipes at 07:36 No comments:

Email ThisBlogThis!Share to TwitterShare to FacebookShare to Pinterest
Labels: ZEBRAS AT WATER HOLE 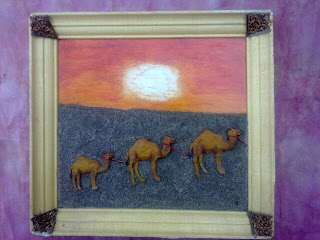 Artist: Athar Abbas
This work by the Pakistan artist Athar Abbas is on a similar theme to that of the Pyramid and Sphinx, and the sky is rather like that in Alhambra Evening.
Athar Abbas has never been to Africa or the Middle East, but is fascinated by the animals of the African continent as can be seen in some other examples of his work such as the Zebras at the Waterhole.
There are small camels in Pakistan, but they are not as big as those that I have seen in North Africa.(I was bitten by one in Morocco, but that's another story.) The camels in this picture are carved from wood and the desert, shaded in the evening sunlight, is made from crushed brick and stone. The camels are two-dimensional, trudging through the desert.
The hand-made frame is the artist's distinctive signature, with varnished crushed stones in the corners of the frame.
Posted by His Art and My Recipes at 03:37 No comments:

Email ThisBlogThis!Share to TwitterShare to FacebookShare to Pinterest
Labels: SHIPS OF THE DESERT
Older Posts Home
Subscribe to: Posts (Atom) His Art and My Recipes